A Rotten and Unclean Member of Society

“Compeared Elspet Gunn in Latheron formerly dilated of uncleaness and gave Mr Sinclair of Latheron as father of her pregnancy”.

“Mr Brodie [the Minister] informs that he has been dealing with Mr Sinclair of Latheron about Elspet Gunn’s Child who gave him reports to the Session as Father of the same but all to no purpose. He insists upon his innocency in her cause and said he would willingly attend the session if required to Clear himself as to that charge. The Session thinks this but words of course and considering how often he has repeatedly offended in this way as appears from our minutes and that the laws of the church have not been hitherto multed against him for his many fornications”.

“The Session are unanimously of the mind that the Minister himself or the Clerk should Cite him for three several times to next session and if contumacious [willfully and obstinately disobedient - Contumacy, was an offence which no constituted Church could put up with] that he be referred to Presbytery and it is their earnest desire that when the Presbytery take a full view of the heinousness of this man’s crimes that they shall authorise their Minister to excommunicate this Delinquent as a rotten and unclean member of Society”.

So in November 1771 Elspet Gunn came before the kirk session as pregnant, giving Mr Sinclair of Latheron as father to her pregnancy.

In May 1772 when she next appeared, her child had been born and Mr Brodie the minister had been trying to deal with Mr Sinclair. The session elders were now getting despairing about Mr James Sinclair, Younger, of Latheron. As usual he got the upper hand by agreeing to attend the session and clear himself. They said his denials were just words but Sinclair’s attitude was that the kirk elders were just talking words too. They didn’t believe his claims of innocency but apart from calling him names and agreeing that the church laws had not been applied correctly they realised they hadn’t managed him well enough. They decided to refer Sinclair to the Presbytery. As a court, presbyteries had the power of review over decisions taken by kirk sessions or congregations. If he was excommunicated he would lose all church privileges (including suspension from the Lord’s Table, church marriage and burial) in his own and any other Scottish parish. This was regarded by the general population as a very serious matter.

One result of excommunicating Sinclair would be the loss of his fines to be distributed to the poor of the parish. But the records of him paying fines are not that good anyway.

There is no record of the outcome of these latest discussions between the kirk session elders and Mr James Sinclair, Younger, of Latheron. But whatever the outcome it made no difference to the activities of Sinclair as before long the story repeated itself yet again

Posted by Farr McLeod at 8:34 PM No comments:

1769, 13 August. James Sinclair of Latheron had a child baptised who was begot in fornication. Named William. Witnesses James Aulach and Dond Miller in Latheron.

Unfortunately the name of the mother was not recorded. It is possible that baby William’s mother was Elspet McKenzie who was brought before the elders on 16 April 1769. If Sinclair had married the mother – but clearly he did not – the child would still have been seen to have been begotten in fornication. Furthermore, even though Sinclair admitted paternity of his son William and had the child baptised this did not give the male child any inheritance rights.

Posted by Farr McLeod at 5:35 PM No comments: 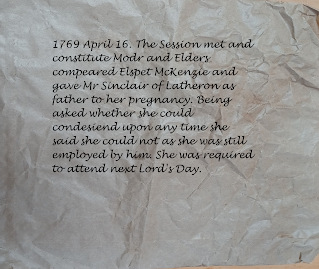 The session met and constitute. Modr and Elders compeared Elspet McKenzie and gave Mr Sinclair of Latheron as father to her pregnancy. Being asked whether she could condesiend upon any time. She said she could not as she was still employed by him. She was required to attend next Lord’s Day.

So here is another example of James Sinclair of Latheron taking advantage of his  servants. Elspet McKenzie was clearly in a vulnerable situation, as being employed by Sinclair and not under the constant supervision of her parents it was easy enough for him to take advantage of her.

And with the power differential of her being a servant and he being the master it would have been difficult for her to fend him off. As well, resistance on her part would put her employment at risk. She didn’t even want to state a time she got pregnant because she was still employed by him. There was never any chance of marriage to Sinclair of course. Sinclair effectively treated her like a concubine but with no-one to look after her interests.

I did not locate a birth record of the baby of Elspet McKenzie. It is possibly the baby William – see next blog.

1770 It appears that the funds due to the Session since the last distribution are as follows:

There were about 14 items listed as being due to the Session for distribution and expenses (including £75 for a new velvet mortcloth) demonstrating that while the moral character of the parish and punishing law breakers was important, the Session was really about money.

As was generally the case, no money was given to Elspet or her family even though raising an illegitimate child would need support. Sinclair’s fine (if they got the money) went exclusively to the Session funds for distribution.

The Land of Heather by Clifton Johnson

Posted by Farr McLeod at 9:50 PM No comments: